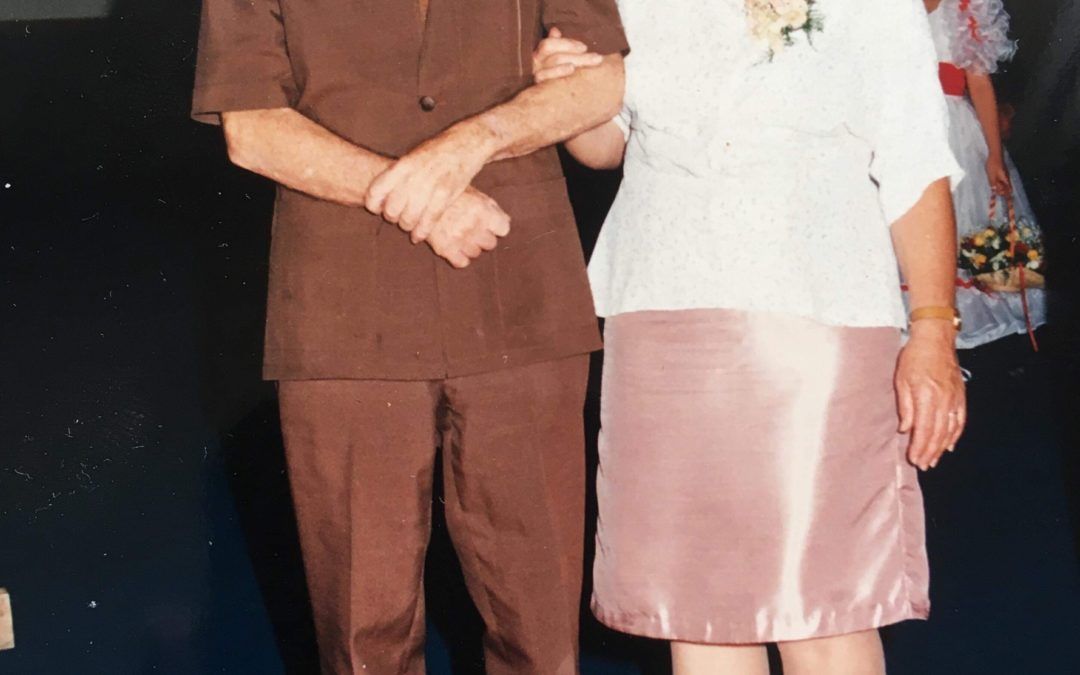 The World Health Organization defines palliative care as, “…an approach that involves the quality of life of patients and their families facing the problems associated with life threatening illness through the prevention and relief of suffering by means of early identification and impeccable assessment and treatment of pain and other problems, physical, psychosocial and spiritual.”

You might think that palliative care is only for when you’re close to death. It’s not just for then – that’s only part of the story. Did you know you could receive palliative care when you’re diagnosed with a life threatening illness? It’s very flexible. You can also have it while you’re being treated.

The photo above is my Mum and Dad at my youngest brother’s wedding, 8 months before he died.

I wish my dad had received palliative care. He was so mismanaged and died a painful death. My dad had been extremely ill for an awfully long time. He kept going to the doctors, with an horrendous phlegmy cough. It woke him from his sleep, stopped him in the middle of a conversation, and continued to interrupt his life for months and months. Dad went to the doctor and got antibiotics. They didn’t work. So dad went back to the doctor and got more antibiotics – they didn’t work either. And so the cycle continued for ages. During this time dad was never asked to get, nor did he receive an x-ray.

The doctor diagnosed him with pneumonia, and told Dad that it was just a persistent form. I don’t quite remember how dad finally got the diagnosis of terminal lung cancer. I think it was while his doctor was on holidays and a locum saw him. By this time, his cancer was incurable. And they told him that he had two years left, and make the best of it. So Dad decided to find alternative treatments.

What Dad did next

He read every book on people who had survived the unsurvivable, he gave himself high doses of vitamin C injections every day, went to a Chinese medicine doctor continued to do yoga, and watched every Laurel and Hardy and Groucho Marx and Marx Brothers films available on video. He believed that laughter was the best medicine. He ate nutritional food and became a Buddhist, after being a Roman Catholic his whole life. He had acupuncture every week, and meditated every day.

Dad lived a wonderful life, until he didn’t

Dad lived a wonderful life until he didn’t. Dad went from being a solid man of 85 kilos, down to 30 kilos. He couldn’t stand being hugged or kissed or even touched. He said that it was like having a knife, plunged into his skin. It was heartbreaking seeing Dad in this way. Because Dad always hugged and kissed us, he would always have his arm around us while talking to him.

Then the conversation stopped. Dad had to have a bronchoscopy – A microscopic camera at the end of a long tube put down his throat. This is when the conversations really stopped because they destroyed his voice box. He had a beautiful voice, and then it was gone.

For some reason, people thought he was deaf and yelled slowly and loudly at him. This was particularly devastating to him and to us. Dad used to say sing around the house for no reason at all, just to sing. My fairy godmother, Auntie Clare, who was mums sister and the midwife for me said that she could hear Dad singing in the pub down the street when I was born. He had loud, beautiful voice. He loved singing so much.  I think that’s when the light went out on his life for him.

The impact of palliative care.

The impact of palliative care could have been the light in his life, but we didn’t know it back in 1987. I really wish it was available.

You see a palliative care team isn’t only made up of doctors and nurses, it’s a massive chain. It consists of doctors, nurses, allied health professionals, such as physiotherapists, psychologists, counsellors, psychotherapists, pharmacists, social workers, occupational and speech therapists and trained volunteers.

The team takes care of the whole person with the life threatening illness, their carers and family. They help with pain management and symptom control.

Children and adolescents might also have a palliative care team throughout their lives because of a degenerative condition.

Talking about death might won’t make you die, it will actually help you live a life filled with joy and freedom.

We are all mortal and we don’t want to talk about death because it forces us to face our own mortality and feeling uncomfortable. The more we have conversations about our own deaths or someone near and dear to us, the more prepared we’ll be.

Having conversations with people who are actively dying can feel big, can be lively and full of life, not death. Conversations are full of memories and meaning, beauty and loss, with many stories shared, closeness and understanding happens. It’s important to be present and witness their life.

Thinking and talking about how you want to die and what you want to happen the end of your own life is imperative. End of life conversations are important and necessary.

Why talk about death?

By talking about death and how you would like your end of life to be can actually make decisions easier for relatives if you’re unconscious and not able to make them for yourself. They’ll know exactly what you want. For example, whether you want to be resuscitated or not, if you want to be saved at any cost or not. Having these conversations makes you more comfortable with death and helps you live a fulfilling life.

Discussions on burial rituals and beliefs, in the afterlife or religion, assists you in demystifying death and understanding it is a natural part of life.

We might not know what really happens after death but, we can make the dying process easier for everyone by having conversations about death.

A palliative care team will support you and help you be prepared as you and your family possibly can be for a good death.

Please have the death conversation. You’ll feel uncomfortable at first but it gets easier as you understand and get closer to the people who are most important to you.

Have the conversation and let me know how it turns out.